TEANECK — Plans are moving forward for the construction of two memorials on the township green that will be dedicated to victims of the slave trade and another to commemorate victims of the Holocaust. 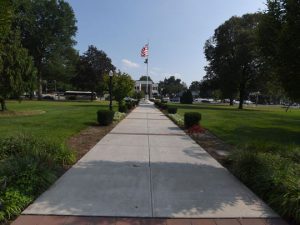 “The goal is to give all of us a look back at some things we’ve done in the past that we’re not necessarily proud of in the hopes of doing things better in the future,” said Deputy Mayor Henry Pruitt.

The plans for the memorials are moving forward amid a national debate about the role of public monuments and whether statues of controversial figures, particularly monuments to the Confederacy and southern leaders in the Civil War, should be removed.

“As some of these statues of the confederacy are taken down, the question becomes what will replace them?” said Patricia Butler, the chairwoman of the Enslaved Africans Memorial Committee. “These kinds of public spaces can become teaching points, where people can learn the true history about one another.”

The township library and other groups will provide related education programs related to both slavery in the United States and the the Holocaust. The library and other groups were awarded a state grant to design the memorials. Architects have been hired to draw up plans for the memorials, which will be located about 65 feet to the right and left of the path that leads to the front steps of the municipal building.

The two memorials, which together will be called the Garden of Human Understanding, are particularly needed in today’s charged political climate, said Steve Fox, a co-chairman of the Northern New Jersey Holocaust Memorial and Education Center Committee.

“It’s about tolerance and learning about the effects of fascism and racism. I think we need that more today than ever before,” he said. “The events in Charlottesville are a stark reminder of how important it is to have a place where people can come to learn about the Holocaust and ensure it will never happen again.”

State Sen. Loretta Weinberg, D-Teaneck, was instrumental in working the $85,000 Department of Community Affairs grant into the state budget, which will help cover the design costs. Each memorial will receive $35,000 and $15,000 will go to the library.

“This will be a unique feature in our unique town,” Weinberg said. “The grant is a small thing, but I think it’s a great step forward for the two groups and I’m anxious to see what they come up with.”

The Township Council approved the parameters for the memorials last year. The guidelines dictate any walls cannot be more than 4 feet tall, and any central structure cannot be more than 10 feet tall. The council had approved four 1,225 square foot potential sites for memorials, but only two groups have come forward with plans.

The idea for the memorials has been in the works for several years. Fox and Bruce Prince, a co-chair of the Holocaust memorial committee, came before the council more than four years ago seeking to build a memorial in Andreas or Brett Park. But council members instead suggested the municipal green as a central site. The Enslaved Africans Memorial Committee approached the council about a memorial in 2015. Both groups are in the midst of a substantial fundraising effort.

The Holocaust memorial will be hexagonal, with exhibition space telling the history of the Holocaust and the stories of local survivors. Memorial stones around the walls can be dedicated to loved ones who were victims of the Holocaust.

Paul Friedberg and Associates has been hired as the Holocaust memorial’s landscape architect and Alan Hantman will be the Holocaust memorial's architect. And Ralph Appelbaum Associates, the firm behind the United States Holocaust Memorial Museum and the Newseum in Washington D.C., and the planned International African American Museum in Charleston, South Carolina, will develop the memorial’s educational program.

Rodney Leon, the architect who designed the African Burial Ground Memorial in New York City and the slavery memorial at the United Nations, will design Teaneck’s memorial to enslaved Africans.

The structure will be shaped like a spiral, and will commemorate the millions of people who were forced into slavery and their struggle for freedom. The memorial will be based on the African symbol of the Sankofa bird, a bird with its head turned backwards.

“Sankofa means ‘return and get it,’” Butler said. “It tells us we have to look back at history and learn from it to move forward.”

This story has been updated to show that Paul Freidberg and associates is the landscape architect for the Holocaust Memorial on the Teaneck green. Alan Hantman is the memorial's architect.