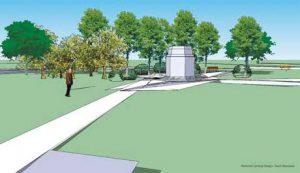 Last year, Steve Fox, co-chairman of the Teaneck Holocaust Commemoration Committee, part of the township’s Jewish Community Council, asked the Teaneck Town Council for permission to investigate putting a Holocaust memorial in the town’s Andreas Park. The council granted permission for preliminary discussions. But a title search revealed that the land was deeded to the town only for the purpose of recreation.

Now, Mr. Fox plans to appear before the council on Tuesday to ask that space in the town’s Clarence W. Brett Park be allotted for a memorial, which would be funded by private donations.

Brett Park is on the west side of River Road, just north of the town’s recycling center, opposite Downing Street and Winthrop Road. It backs on to the Hackensack River.

At this point, the memorial has no budget and no fixed design.

“We are planning an above-ground memorial that people will be able to see from the street, to stimulate discussion,” Mr. Fox said.

“We certainly believe among the survivors and second generation, there are a lot of people who will be kind enough to donate to this kind of thing,” he said.

He expects to come up with designs “contingent on fundraising. We will probably come up with a plan A, plan B, plan C in terms of designs and costs,” he said.

The Brett Park plans will be simpler and less expensive than the proposal offered last March for Andreas Park. Mr. Fox had sought to turn an unused boathouse there into a Holocaust educational center.

One piece of the previous plan that would continue in Brett Park: The chance for donors to dedicate bricks or other pieces of the memorial to relatives who died in the Holocaust.

Like many members of committee planning the memorial, Mr. Fox is the child of a survivor. His father escaped the Warsaw Ghetto and hid in the woods, fighting the Nazis with the partisan underground.

“All of us feel an obligation to the victims and the survivors of the Holocaust to perpetuate the memory of the Shoah and continue to educate future generations so that it will never happen again,” he said.

“People say to me, this is Teaneck, we don’t need something to remind us of the Holocaust, but Holocaust awareness is diminishing every year. The time is now.”

Mr. Fox asked Rabbi Steven Burg, who heads the New York office of the Los Angeles-based Simon Wiesenthal Center, to join him in addressing the Teaneck council on Tuesday.

Rabbi Burg will talk about the global “push to erect and put up memorials while there are still people who can tell the story.”

Rabbi Burg lives in Bergenfield, only a couple blocks from the Teaneck border.

“I happen to think a park is the right place for a Holocaust memorial. That’s where kids are. These memorials are a constant reminder to be vigilant against hate and intolerance and bullying and all of these terrible things,” Rabbi Burg said.

Named for former Teaneck Mayor Clarence W. Brett, Brett Park today features a small parking lot, a place to play soccer, and woods. In the 19th century, melons and vegetables were grown there, on manure imported from stables in Manhattan. At the turn of the century, a resort, Bensen’s Campground, opened. Set by the river, the campground offered nine bungalows. In the 1920s, Teaneck opened a sewage plant that dumped into the river, making it unpleasant to swim in the Hackensack and so dooming the resort. Farming continued on part of the property until around 1961, when its owner, John Rekow, died.