Join us for the Inaugural Capital Campaign Event For the Creation of the Northern NJ Holocaust Memorial & Education Center.

Musical Performance by Dr. Tamara Freeman, playing & expounding on songs of the Shoah composed in the ghettos & camps 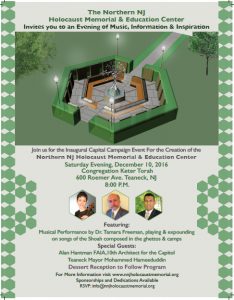